(from Pornohs.com… these guys come up with some seriously funny shit!!)

Simpson will make his entire team of private investigators, still searching for the real murderer of his ex-wife, available to Metro 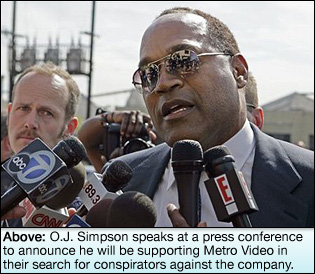 Brentwood, Ca – As Metro Video struggles to emerge from the aftermath of Shit Storm Kenny, which hit the company as a Category 5 shit storm nearly 3 weeks ago, rebuilding is just one of many challenges facing the company.

Just when hope seemed all but lost a bright spot has appeared on the horizon for employees of Metro. Help is on the way from an unlikely source.

HardcoreGossip.com, a traditionally unbiased source of Metro insider news and information, recently brought to light details of a conspiracy plot against the company in a shocking expose.

“Metro is the victim of a scandalous and defamatory conspiracy involving some of its former employees and others,” the web site reported.

“Mike Adams, aka Mr. Metro, has perpetrated a substantial and damaging propaganda scheme on behalf of himself and the conspirators, telling lies regarding Metro for the sole purpose to undermine and destroy the reputation of Metro, and the good name of the individuals that work for Metro.”

OJ Simpson, a victim in the fallout of the 1994 murders of his ex-wife Nicole Brown and her friend Ron Goldman, is no stranger to conspiracies and has offered to support Metro in their time of crisis.

“After my painful experience with the L.A.P.D. in 1994 I know what it’s like to suffer through false allegations and inaccurate media reporting. I just want to help in anyway I can,” stated Simpson.

“Since the day of the murders, and my subsequent acquittal, I’ve searched golf courses and strip clubs all over the U.S. and abroad, desperately seeking the individual responsible for Nicole’s death. It’s been tough. To date I have yet to uncover any new leads and have identified 0 new suspects.”

“Despite this, I remain confident that one day the killer will be found. It’s scary knowing he or she is roaming our golf courses a free man.”

“I’ve been a fan of Metro’s high quality adult video products for years. They’ve helped me through the loneliness and depression which followed the killings. Being a suspect in a double murder case spells death to your social life.”

“As I continue to search for the real killer of Nicole I’ve instructed my investigative team to keep an eye out for any clues which could expose the identities of the Metro conspirators.” 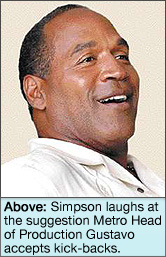 “Honestly, it’s the least I can do,” exclaimed Simpson.

Simpson has achieved only minor success after expanding his investigation to include Metro. Although never a suspect, Bridgette Kerkove has been officially eliminated as a potential conspirator.

“You know what they say, if the baseball bat doesn’t fit, then you know it’s not Brid-gette,” joked OJ.

While much of Metro’s investigation has focused on a handful of employees who left the company to start Defiance Films, Simpson has discounted them as part of the conspiracy, instead he has directed his spies to expand surveillance of Metro’s CFO Les Rich.

“There is something fishy going on with Les. I mean, who the hell hires a money guy named Les Rich!,” exclaimed Simpson.

“That would be like me hiring Yur Guilty or Beth Penalty as my criminal defense attorney.”

Unlike the Nicole Brown and Ron Goldman murder case, with the average length of employment at Metro below 4 months, there are thousands of potential conspirators. Simpson admits he may never solve the case.